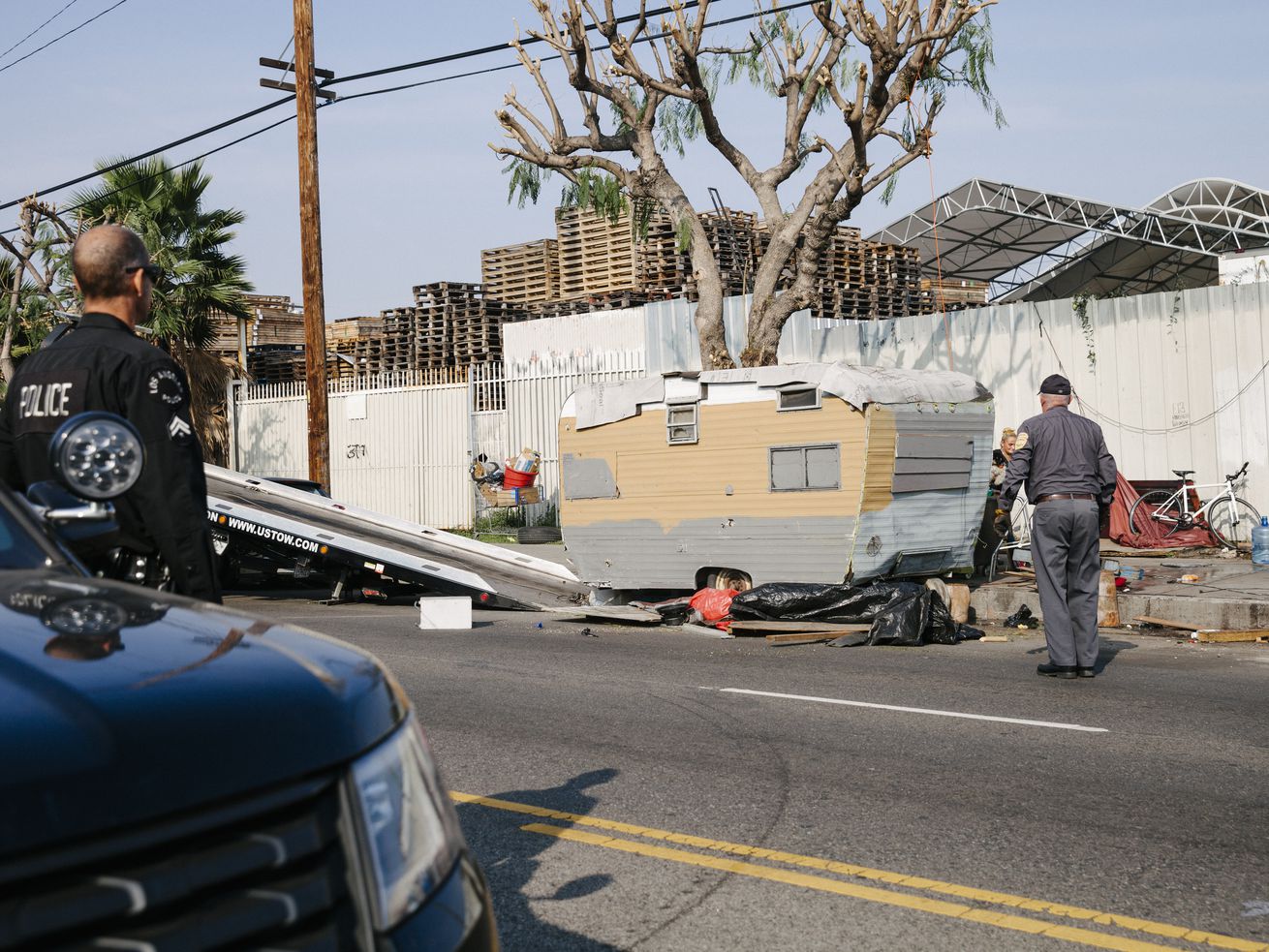 An RV is towed from an encampment Wednesday in South LA. | Photos by Samanta Helou Hernandez What’s it like for RV dwellers during a city-sanctioned cleanup

Margarita Moreno sat surrounded by boxes of cooking supplies, bags of blankets, and a lamp, belongings she had kept in the RV she called home, but that was now being towed away because its registration had expired.

Until Wednesday, Moreno had lived in the RV, which she parked on Gage Avenue in South Central, for three months. She landed there, she says, after losing her job as an in-home caretaker.

“I’m going to stay with a friend until I can get back on my feet again,” she says.

Moreno was one of about 12 people who had their RVs impounded Wednesday as part of a scheduled cleanup of an encampment in the area. The operation, which started at 8 a.m., was one of many that happen across the city every day.

While LAPD enforced the impounding of vehicles on Wednesday, sanitation crews cleaned up the sidewalks, and case managers talked to residents and encouraged them to sign up for shelters.

In Los Angeles County, an estimated 16,527 people live in cars, vans, or RVs. In the city of Los Angeles, it’s illegal to do this in residential neighborhoods, leaving only a patchwork of commercial streets available for those sleeping in vehicles overnight.

Community members and businesses in the surrounding area had complained about the RV encampment, citing health and safety concerns, said LAPD Sgt. Joe Ward, of the Newton division.

“The main reason the clean up is happening today is if you look around you can see the RVs, a lot of them are dilapidated,” he said. “The ones we are taking have human urine coming out as well as human feces coming out, and it’s causing kids who walk to school to step in it.”

On the day of the sweep, sanitation workers drained septic water that was leaking from one of the RVs and rounded up bulky items, such as shopping carts and bins that blocked large parts of the sidewalk.

Many activists have argued that these cleanups, which they refer to as “sweeps” because they can displace camp residents, are not the answer to LA’s homeless crisis. That’s especially true, they argue, in the weeks before the 2020 Greater Los Angeles Homeless Count, where the data collected helps guide funding and the delivery of services.

In an open letter to Los Angeles Mayor Eric Garcetti and city leaders this week, advocates and grassroots organizers who work with homeless residents say “enforcement actions aimed at encampments may affect the integrity and accuracy of the count.”

“With just over a week before the count is set to begin, these enforcement actions create additional problems above and beyond their typically damaging impact on the lives of homeless individuals. Specifically, sweeps requested by local politicians are creating potential problems for the integrity and political neutrality of the count,” they wrote.

“They see the trash, and it’s a problem. But they have to understand that this is someone’s home. They’re gonna have a lot of stuff,” says Esmeralda, who has lived in an RV on this block for two years with her mother, father (who is in a wheelchair), boyfriend, and two pets. Before living here, the 22-year-old paid rent on an apartment for her family, but could no longer afford it when she lost her job at a perfume factory.

This was the first time they had experienced a cleanup. “Why don’t they give us an appropriate spot where we can all park or at least provide showers, porta-potties, dumpsters, anything would be helpful,” she says.

About a half dozen RVs were towed during the operation.

“If they’re parked illegally we tow them, if they don’t have registration we tow them, and or if they’re a hazard to the community, like issues with leakage, we tow them,” said LAPD Sgt. Sean Wells, who works with the department’s homelessness coordinator’s office.

According to Ward, residents of the encampment were notified by service workers two months in advance. Some left before the cleanup started, but for others, moving wasn’t so simple.

Esmeralda and her family were receptive to the service workers, and were in the process of finding a place to park through Safe Parking LA when the sweep notice came. But on Wednesday, the day of the cleanup, she says their RV wouldn’t start.

“They didn’t even give us a chance to at least pull it,” she says. “I wish instead of taking it, they found a way to help us move it.”

According to Wells, once RVs are impounded, owners can pay fees, which average $339, plus a $53-per-day storage fee, to get them back; buy them back for a low price after they’re sold at a low price (sometimes they’re even given away) during the impound lot auction; or find an alternative place to sleep.

Because they don’t have a storage space, whatever belongings Esmeralda and her family couldn’t carry, were to be thrown away by sanitation crews. Their plan is to stay at a shelter for a while until they find a more stable place to live.

By noon, most of the RVs had been towed. All that was left were a few pieces of furniture, some mattresses, and an old suitcase.