As part of the meeting, the mayor accompanied the unidentified delegates on a tour of the city’s Unified Homelessness Response Center, a pair of homeless shelters and the Jordan Downs public housing complex, officials said.

Garcetti then released a public letter to President Trump in which the mayor appeared to strike a cooperative tone, describing homelessness as “a problem that predates your administration and mine.”

“We must put politics aside when it comes to responding to this heartbreaking humanitarian crisis,” Garcetti wrote. “I hope you will provide
the federal assistance that is needed to help cities stop homelessness in America and help our veterans and most vulnerable of citizens. This is our watch. This is our time. This must be done. I look forward to working with you and your administration on this issue.”

“Any day that our nation’s federal leaders are willing to listen to Americans living in our 19,000 local communities across this country about the
challenges that they face is a good day,” he added.

The delegation’s visit comes just months after a Fox News segment in which Trump blamed the homeless crisis on “liberal” Los Angeles and California political leaders were to blame for homelessness and that he may “intercede” to “get that whole thing cleaned up.”

This comes on the heels of a Washington Post report indicating President Trump has ordered a “sweeping crackdown” on homelessness statewide, including discussions on federal involvement “to get homeless people off the streets of Los Angeles and other areas and into new government-backed facilities”, officials told the Post.

Among the proposed plans is an effort to raze existing homeless camps in the city and move people into government-backed facilities, according to the Post.

“There are things the federal government could do,” says Jack Pitney, Professor of Government at Claremont McKenna College,  “It could increase housing opportunities. It could increase the availability of group homes for people with mental disabilities. There’s lots of real things the federal government could do but it’s not entirely clear President Trump in interested in doing any of them.”

City Councilman Mitch O’Farrell, chair of the city’s homeless and poverty committee, reacted to the report by calling the president’s agenda “concerning”.

“It sounds an awful lot like internment and this administration does not have a good track record,” O’Farrell said, alluding to what he called the government’s policy of putting “children in cages” in U.S. immigration detention centers.

Mario Guerra, Budget Chairman for the California Republican Party, welcomes Trump’s involvement: “If this is a political thing, who cares? We need solutions. We need to fix our problem. The California Legislature has let this problem go.”

In July, Garcetti told CBSLA he would “welcome [Trump’s] involvement” in the issue and “would be more than happy” to invite the president himself to walk the streets of L.A.

The homeless outreach agency that was meant to move hundreds of people from the streets into housing, shelters or treatment for mental illness and substance abuse has failed dramatically to meet the goals of its contract with the city of Los Angeles, according to an audit released Wednesday by Controller Ron Galperin.

The audit found that, despite having more than doubled its staff of outreach workers in the last two years, the Los Angeles Homeless Services Authority missed seven of nine goals during the 2017-18 fiscal year and five of eight last fiscal year.

“The goals that were set by the city are not unreasonable,” Galperin told The Times. “Quite frankly, they are [setting a] pretty low bar to begin with. If you can’t meet the low bar, that’s a problem.”

Outreach workers were supposed to place into permanent housing 10% of the homeless people they assessed. But in the fiscal year that ended in June, they placed only 4%, the audit reported. The goal was 20% for placing people in shelters, but they achieved only 14%.

The discrepancies were greater for referrals to treatment: 6% for substance abuse and 4% for mental health. Both had goals of 25%.

At a news conference Wednesday, Galperin called those results “shocking.”

The authority’s “outreach is fundamentally limited because it is reactive instead of being proactive,” he said. “Much of the outreach has been consumed with responding to calls about homeless encampments throughout the city of Los Angeles.” 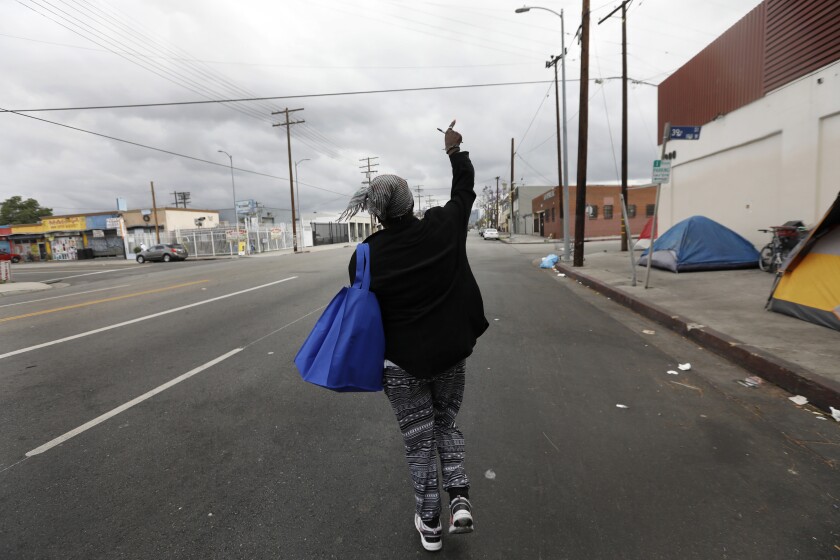 LAHSA, as the authority is commonly known, issued an equally biting response that was distributed in writing at the news conference.

Peter Lynn, the authority’s executive director, called the audit misleading, saying it studied only measures that are ill-suited to determining the effectiveness of homeless outreach and looked at only the fraction of LAHSA’s system that is covered by the city contract.

“It ultimately says nothing about LAHSA’s outreach efforts, which contacted record numbers of our homeless neighbors in the year it studied,” he said in the statement.

“The report did a good job of pointing out where some of the gaps were,” she said after the news conference, “and we agree that proactive outreach is the way to go as opposed to reactive outreach.”

The main problem with the system, she said, is that it is unbalanced — heavy on engagement with homeless people, but short on shelters and housing.

“We have 30,000 people who have said to us: ‘Yes, we want resources. Yes, we want shelter.’ But yet we don’t have anything to offer them,” Marston said.

While attributing some of the shortfalls to the underlying shortage of affordable housing and treatment resources in the city, the audit criticized the city for setting fuzzy goals that weren’t linked to the scale of the homelessness crisis and knocked the authority for not being able to meet them.

Galperin said the audit, which began last year, took months to complete “partly because getting accurate and consistent numbers from LAHSA has been a challenge.”

The authority, according to the audit, “lacks a rigorous performance review process for its outreach activities. Moreover, data-driven decisions about the deployment of resources are not made because the information is neither timely nor accurate.”

LAHSA provided the controller’s office with four different versions of its outreach numbers, each one significantly different, Galperin said. A chart in the audit showed the percentage of homeless people placed into shelters dropping from 64% in the first version to 19% in the last.

The authority attributed those changes to the loss of some records during a transition to a new data system.

The audit also faulted a report by the authority that it placed 21,000 people into permanent housing last year. Not only did the number include placements made by other agencies, such as the U.S. Department of Veterans Affairs, it included duplicates by counting individuals or families that fell in and out of homelessness during the year, the audit said. 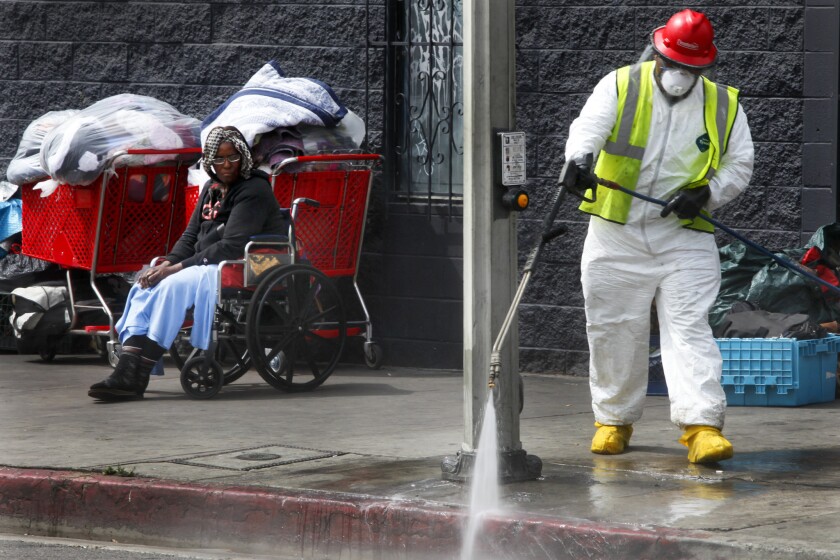 The report also faulted LAHSA’s participation in cleanups of homeless encampments by the city’s Bureau of Sanitation for contributing to its failings with outreach. The authority estimated that cleanups accounted for 67% of its outreach time in the city.

“In many cases, they are required to talk with people that are already working with homeless service providers,” the report said. The city should “rethink its outreach policies and more sufficiently find a balance between a proactive outreach strategy and an effective response to ‘hot-spot’ encampments.”

The audit sharply criticized the goals set by the city in its contract with LAHSA.

The goal that 25% of homeless people with a substance abuse disorder would be connected to appropriate treatment “supplies no indication about what the 25% target represents,” it said. “Even if LAHSA had met its 25% target, only 167 … would have received substance abuse treatment,” it said.

In a written response, Lynn said those numbers reflected a flaw in the audit. “Metrics around mental health and substance use are not appropriate … when evaluating outreach,” the statement said.

Marston added that outreach is “about how well we interact with them. It’s about the quality of the interaction.”

Galperin said the city and authority should recast goals that are understandable and specify the number of people expected to receive assistance, rather than using a percentage. LAHSA also should adopt a data-driven outreach system modeled after the CompSTAT policing model used by police departments across the country, including the LAPD.