These homeless people are blocked from social services when there are few parking spaces to leave their cars without risking tickets.

Michel Moore hopes the initiative will help to cut back the city’s homeless population, which jumped by 16% over the past year. On Saturday June 22d, OCLA’s founder and President attended the First Annual Homeless Youth Forum of Los Angeles. Sponsored by the LA Homeless Services Authority, the summit’s goal was to discuss both challenges within the homeless youth system and the barriers faced by the homeless youth as they seek the support to leave homelessness behind.

The event opened with a Resource Fair where invited providers who offered important support for homeless youth hosted tables where they introduced attendees to important services.  OCLA was asked to introduce attendees to the WIN app as well as the recently released 2019 Directory of Services for Homeless Youth, Families and Adults. The Resource Fair was open from 9am-1pm and the OCLA table was busy- offering flyers, posters, cards and more to introduce attendees to WIN. For the homeless, summer is not filled with lazy beach days, vacations and BQQ’s – the warm weather brings with it a unique set of threats:

While permanent housing is the solution to these threats, many local nonprofits offer care kits designed to support the many homeless  individuals and families who are on streets or sleeping in cars while waiting to top the long list for housing assistance.  Consider reaching out to your local dropin center or homeless assistance team and offering to donate supplies such as water bottles, sunscreen, clean socks, woven or cotton hats, lip balm, nonperishable food items. And don’t forget to ask for suggestions of other items they may need to put together hygiene or care packages for the homeless families or individuals living in your area.

OCLA is proud to introduce the members of our Social Media team- TEAM WIN! Since early 2019, Daryll “Relly” Brown and Perla Espinoza have been learning how to use social media and other outreach tools to raise community awareness about the WIN app. Under the guidance of marketing and social media consultant, Tony Rodriguez, Relly and Perla have been posting to Twitter and Facebook, speaking at public presentations about the WIN app alongside OCLA/WIN founder Denise McCain-Tharnstrom, and distributing flyers on streets and colleges campuses to raise awareness about the usefulness of WIN.

Relly and Perla came to OCLA from Safe Place for Youth, a local dropin center for homeless youth based in Venice and have lived experience of  homelessness and daily struggles for resources. Neither Relly nor Perla were familiar with Twitter and rarely if ever used Facebook prior to beginning their internships with OCLA. Follow Relly and Perla on Twitter at #WINApp and #TeamWIN, check out their Facebook posts and look for them to launch OCLA’s Instagram page in early Fall! The housing crisis is alive and well, even at an elite institution like the University of Southern California.
Huff Post Business Apr 22, 2019 By Natasha Piñon

LOS ANGELES ― Yoojin Park, a junior at the University of Southern California, is a biology major and a tutor for a program that matches undergraduates with local elementary schools. And as of November of last semester, 21-year-old Park is also a sex worker.

Since escaping an abusive home three years ago, Park has bounced between student housing and homelessness, first at a small school in the Bay Area and now as a transfer student at USC. Park is a pseudonym used to protect her identity, but her story is one of many that go unnoticed on the sprawling, sunny campus of USC ― a school nicknamed the “University of Spoiled Children,” whose offerings include a $6 cupcake vending machine.

She spent one summer break sneaking in and out of a friend’s dormitory in the Bay Area and another summer on the couch of a friend’s brother in Los Angeles. Last December, Park realized she wasn’t going to be able to pay her rent while holding two on-campus jobs and looking for a third. Her schedule with two jobs and a full course load made fitting in a third job all but impossible. 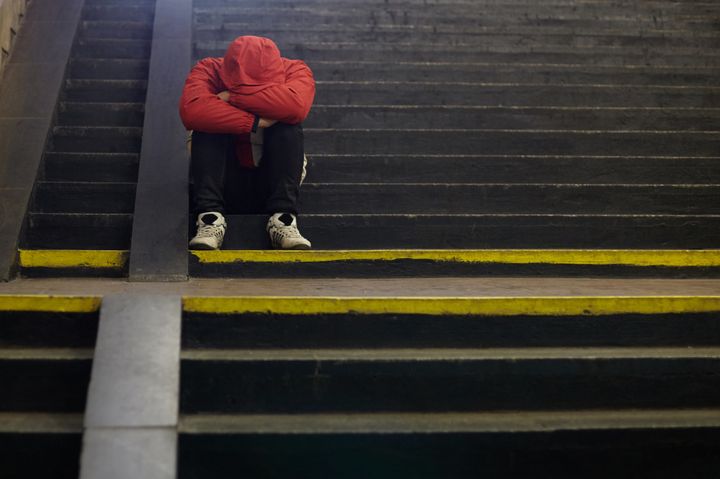 “I found a sugar daddy,” Park said. “If I didn’t do that, I would have been homeless. I would be in the tents by the highway.”

The site connected Park to a 60-year-old divorced doctor who gives her money in exchange for regular dinner dates. The money ensures she can pay her rent each month.

But Park’s struggles are hardly solved. The client controls how they meet and how much he pays. Currently, her savings account holds $3.

“I would be homeless without him,” Park said. “As a feminist, I hate saying ‘without him,’ but I have to be honest. That’s just how it is.”

In The Same Boat

Though Park’s case is dramatic, it is emblematic of a larger trend at USC. Though attempts to survey the student population have yet to yield concrete numbers, discussions with staff and student leaders indicate hundreds of students have issues with housing stability.

“What I can tell you right now is that a significant amount ― an alarming amount ― of students said they faced an issue of homelessness in the last year,” said Mai Mizuno, a senior at USC and a representative of Undergraduate Student Government, citing an exploratory survey distributed to some members of the student body.

The phenomenon at USC echoes nationwide trends. More than a third of college students reported a lack of stable housing throughout their undergraduate terms last year, according to findings from the Wisconsin HOPE Lab, a research project dedicated to analyzing accessibility in higher education.

“There’s this idea that you can mow lawns and you would be able to save up enough money to go to school for the year,” said Anthony Hernandez, a researcher for HOPE who worked on the report. “It’s a harmful narrative.”

Tuition at USC for undergraduates is currently $55,320, with a 3.5% increase recently announced for the 2019-20 academic year. And as housing costs in Los Angeles also continue to rise, Park’s struggle to stay afloat could become increasingly common.

USC has been embroiled in a college admissions scandal since last month, as dozens of wealthy parents were accused of paying bribes and cheating their children’s way into elite colleges. Authorities charged actress Lori Loughlin with committing crimes to help her daughter, a YouTuber who once said she was more interested in partying than class, get into USC.

“When people see USC, and the stereotype of USC, it’s not that at all,” Mizuno said.

In higher education across the country, a push for more first-generation and high-financial-need students has broadened access to a higher education system still oozing with elitism. Often, though, students from historically disenfranchised backgrounds are admitted but not provided necessary resources for academic and personal well-being. Higher enrollment of low-income and high-financial-need students doesn’t always keep these students from hunger or homelessness.

There’s also a great deal of stigma against asking for help with homelessness.

“They don’t want anybody to treat them differently,” Merriman said. “They just don’t want people to know.” 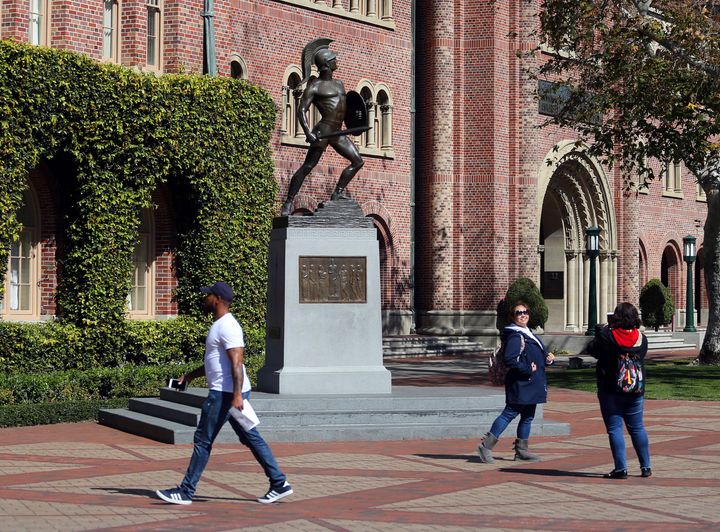 Three years ago, two students approached Catherine Quinlan, the dean of USC Libraries, to ask if they could stay overnight in Doheny Memorial Library, which closes at 10 p.m. Quinlan assumed they wanted to use the library to study all night before finals and said no. The students explained that they didn’t need it to cram ― they had no other place to sleep.

It was eye-opening for Quinlan. She contacted other administrators and eventually joined the steering committee for a new initiative on eliminating homelessness at USC.  When she saw one of the students a year or so later, they were embarrassed that Quinlan recognized them. She cites the “shame factor” as the biggest obstacle to tackling housing instability among students.

For Park, the library was also a refuge. She worked the graveyard shift at Leavey Library, the lone campus library open 24 hours a day, which gave her a place to stay at night. Around 3 a.m., most students would clear out, but she noticed one person who was there every night.

He always wore a hoodie, which he would sleep inside of, and he brought a standing lamp with him to his constant perch on the second floor. One time, Park saw him outside of the library on campus at 4 a.m.

More than a third of college students reported a lack of stable housing throughout their undergraduate careers last year.

She hesitated to ask him if he was homeless, too. “He was sleeping anyway,” she said.

That even Park held back from asking him hints at the difficulty in identifying and helping vulnerable students.

Though it’s not always easy to spot a student experiencing homelessness, there are many ways to address the root problems ― which, even at USC, are the same that are causing housing insecurity and homelessness nationwide.

“It has so many different heads that keep popping up,” said Brenda Wiewel, the director of the USC Initiative to End Homelessness. “If we solve it here, we’ve solved it everywhere.”

At USC, a campus known for its outward displays of wealth, the first step may be just making the problem less invisible.

“How do you bring up the fact that you haven’t eaten for two days when your classmates are talking about their spring break trip to Paris?” Park asked. “When I first opened up about my struggles in class, people thought I was joking.”

“I just want people to know that I’m here,” she continued. “That I’ve been homeless, that I’m a sex worker and I’m amongst you.” Over 1 in 3 (37%) households in California struggle to meet basic living costs, and 6 in 10 Young Children Live in Struggling Households. The rate of working households living with incomes below the Real Cost Measure is increasing, even while the economy is claimed to be growing and official unemployment low.  Read the United Ways of California 2019 Real Cost of Living in California Report and call for your community, business, civic, nonprofit and philanthropic leaders to work towards solutions to help struggling families move up.