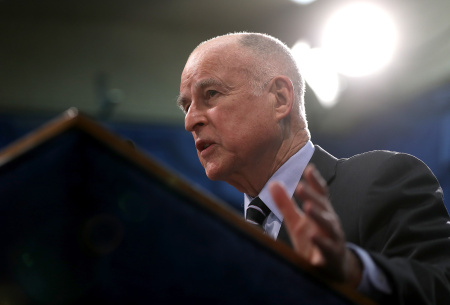 But with the skyline of one of the nation’s most expensive cities as the backdrop, they acknowledged the state’s housing crunch is far from solved.

“We cannot move past today and just check the box, say we’ve done housing and move onto something else,” said Sen. Scott Wiener, a San Francisco Democrat. “When you spend 50 years driving your car into a ditch that means it’s a really deep ditch.”

But it will be several years before affordable housing units start popping up across the state and, when they do, they won’t cover California’s full demand. A $4 billion housing bond still needs approval from voters at the ballot box in 2018. The $75 fee on real estate transaction documents created in another bill is expected to generate between $200 and $300 million a year — far less than the $1 billion handed out to communities through redevelopment funds Brown halted in 2012.

“That put the state’s production into this huge tailspin that we’ve been in ever since,” said Matt Schwartz, president of the California Housing Partnership. The new legislation, he said, “changes the dynamics and tells the developers they can count on state investment again.”

Still, the money combined in the bills is expected to create up to 90,000 affordable rental homes in the next seven to 10 years, a fraction of what’s needed.

Beyond the money, other bills aim to streamline regulations that can slow down construction for a variety of reasons, including communities needlessly delaying projects they don’t want.

Democratic Sen. Nancy Skinner of Berkeley said two of her bills aim to put a stop to “NIMBY,” or “not in my backyard,” culture that keeps some cities from building more housing that low-income people can afford. One bill gives cities legal cover to require “inclusionary housing,” meaning developers must include low- and middle-income units alongside market-rate ones.

Lawmakers passed the bills during the final week of session in mid-September, with the real estate transaction fee nearly faltering in the Democratic-controlled Assembly. In previous years, Brown and legislative leaders had been unable to reach agreement on a housing fix, with Brown arguing for regulatory reform and lawmakers pushing for more money.

This story has been updated. 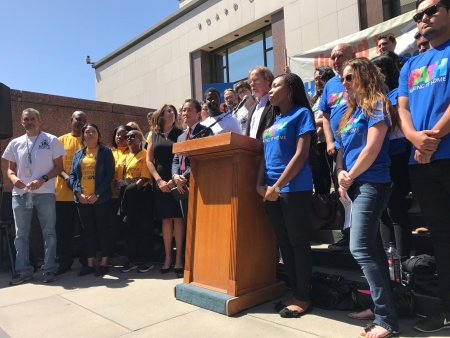 Money is about to start pouring in to L.A. County’s most ambitious (and expensive) effort yet to tackle homelessness.

The funding comes from a sales tax hike that kicks in Sunday, thanks to Measure H, which county voters approved in March. The 1/4-cent rise will go entirely to services and housing for homeless people. It’s expected to generate as much as $355 million annually.

In reality, some of that money has already been spent.

“Because of the urgency of the homeless crisis in the county, the Board of Supervisors approved expenditures,” said Phil Ansell, director of the county’s Homeless Initiative.

The county’s also under pressure to move quickly—the tax expires in ten years and its proponents made a commitment to housing 45,000 people in the first five years and prevent another 30,000 from becoming homeless.

“By next year, we will have good news to report,” said Supervisor Mark Ridley-Thomas, who authored the measure and campaigned for its passage. “I am encouraged by the energy, innovation, and accountability that’s going to make voters proud.”

The citizen’s committee overseeing that accountability met for the first time this week and announced plans to partner with academics to follow the funding and evaluate its effectiveness. The first report is expected in about six months.

Funding in the first year will focus on beefing up outreach teams, providing long and short-term rental subsidies to people and families currently on the streets, and beefing up the shelter system to get people off the streets into temporary shelter quickly.

The board approved the initial spending package in June.