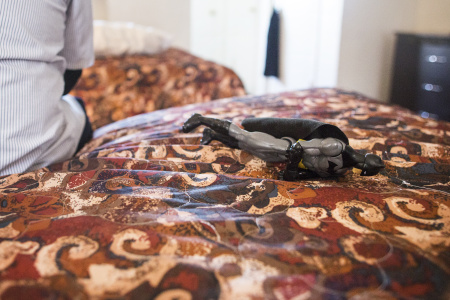 At the moment, families and individuals on the verge of homelessness reside in the motel.; Credit: Maya Sugarman/KPCC

A controversial proposal to turn an old motel near Temple City into housing for homeless will not go through.

Mercy Housing, a nonprofit developer, had planned on converting the Golden Motel on Rosemead Blvd. into apartments for the homeless. But on Monday the developer withdrew its proposal from L.A. County’s Regional Planning Commission.

According to Ed Holder, regional vice president of real estate development, the motel’s owners were not willing to wait out Mercy’s efforts to gain neighborhood support for the project and county approval, and decided to go with a different buyer.

“While I am deeply disappointed that the Golden Motel project will not happen, the unfortunate reality of the Southern California real estate market is that every property for sale, even those as troubled as the Golden Motel, has multiple offers to purchase,” Holder said in a statement. “We see the impact on rents, the rising affordability gap, and the increase in homelessness.”

A man who answered the phone at the Golden Motel’s office declined to comment.

The failure of the Golden Motel project comes at a time when the City and County of Los Angeles are looking to massively expand construction of housing for homeless. Old motels like this one, largely inhabited by people who are homeless or on the verge, had been seen as a logical target for redevelopment in a region that’s struggled to place services and homes for homeless outside of Skid Row.

“It’s so clear that these are serving as less effective solutions to homelessness than what would replace them,” said Chris Ko, director of homeless programs for the United Way of Greater Los Angeles. “But we learned that this is an emotional issue and we need community education.”

The Golden Motel proposal drew considerable, vocal opposition — and some support — from neighbors, a group of which formed to fight the project.

“The reality is they had great intentions, but they really didn’t do it right,” said Lucy Liou, a Temple City resident who opposed the redevelopment. She said the proposed project was too large, situated in too residential an area, close to too many schools, and without enough public safety services nearby.

Liou said she wasn’t confident housing homeless in a development with services was enough of a guarantee they’d succeed and not disrupt or impact the quality of life or safety of neighbors. She was also concerned they wouldn’t be encouraged to become self-sufficient.

“These developments need to happen, [and] if you want them to happen in bedroom communities, all the more reason to involve the community,” she said.

Now, she said, she’s waiting to see who ends up buying the motel and what they do with it.

Ko said advocates will continue pushing for more services and housing in the San Gabriel Valley. The United Way pledged to start campaign to help developers with community relations around their proposed homeless housing projects.

“We can all take part in something pretty transformational for our homeless residents and our communities,” Ko said.

Timoteo Arevalos never imagined he’d end up here, loitering for hours on a bench at Hollenbeck Park in Boyle Heights, using his backpack as his pillow.

He used to have a government job, but the recession hit and he was laid off. He then tried to scrape by as a dishwasher, but last fall his hours were cut and he couldn’t pay his rent.

Now, he is part of a rising number of Latinos who are living homeless in Los Angeles. Recent figures released by the county show that Latino homelessness shot up by 63% in the past year, a staggering number in a county that saw its overall homeless population soar by 23%, despite increasing efforts to get people off the street.

Nearly every demographic, including youth, families and veterans, showed increases in homelessness, but Latinos delivered one of the sharpest rises, adding more than 7,000 people to the surge.

Recent figures released by the county show that Latino homelessness shot up by 63% in the past year, a staggering number in a county that saw its overall homeless population soar by 23%, despite increasing efforts to get people off the street.

Nearly every demographic, including youth, families and veterans, showed increases in homelessness, but Latinos delivered one of the sharpest rises, adding more than 7,000 people to the surge.

“I would say it’s a whole new phenomenon,” said County Supervisor Hilda Solis, whose district saw Latino homelessness go up by 84%. “We have to put it on the radar and really think outside the box when we consider how to help this population.” Read More Over the last months we’ve discussed Collective Impact at length here on the Hub. A Way Home as a coalition and the Canadian Observatory on Homelessness (a founding coalition member) support communities to have the tools they need to develop and implement targeted strategies to prevent and end youth homelessness. We encourage communities to take a Collective Impact approach in this work, which requires working across the systems that drive young people into homelessness, but that can also be part of the solutions. Just a quick refresher – there are five conditions of Collective Impact: Common Agenda, Shared Measurement, Mutually Reinforcing Activities, Continuous Communication and Backbone Organization(s)/Functions. So where do communities get stuck? One of the main challenges is understanding the roles of various forms of data and how to get to shared measurement.

For a long time in Canada, there was little consensus about the role and use of research and data in responding to homelessness. In some quarters there was even deep resistance and hostility to the notion, commonly expressed by the statement: “We don’t need research – we know what the problems and the solutions are.” In recent years, the situation has improved significantly, as those in policy and practice now generally see the value of research and data and researchers have become much more adept at engaging communities in this work.

All of this raises the question of what the role of quality research and data should be in the development and implementation of homelessness policies, programs and services?  What sort of collaborations are necessary to ensure quality and utility, and ultimately to contribute to more effective programs and services?

To support this process, the Canadian Observatory on Homelessness (COH) is working in collaboration with A Way Home Canada (AWHC) and the National Learning Community on Youth Homelessness (NLCYH) to design and implement a vision for a national youth homelessness “Data Dashboard” that will be a resource to support people in communities and all levels of government in their work to prevent and end youth homelessness. The goal of this work is to generate new and useful knowledge that impacts on policy and practice, standard tools and resources to support communities, programs and services in their efforts to get to a place of shared measurement. The values that guide our work include:

On a practical level, our work to support policy making, community planning and program delivery requires us to deepen our understanding of the needs that exist within the youth homelessness sector and government, and to make the case for the benefits of consistent and shared measurement and data collection. To get there, we need to review the strengths and weaknesses of existing tools and resources both within Canada and internationally. We also need to understand the barriers and opportunities for a more coordinated, consistent and shared approach to measurement, program outcomes and data collection, to make the case for why this is important and ensure this vision is communicated clearly. June is Gay Pride Month and around the nation thousands of marchers walked for the protection and understanding of LGBTQ rights. 30- 40% of homeless youth are LGBT; Family rejection family abuse were the most common factors contributing to LGBT homelessness.- See more at: https://williamsinstitute.law.ucla.edu/press/americas-shame-40-of-homeless-youth-are-lgbt-kids/#sthash.aqsDjXcu.dpuf

Even though this year’s homeless numbers increased, we should remain hopeful.

State Sen. Toni Atkins, D-San Diego, left, talks with Sen. Ricardo Lara, D-Bell Gardens, at the Senate on Wednesday, May 31, 2017, in Sacramento. By a 26-12 vote, the Senate approved Atkins’ bill, SB179, that would add a third gender option on state…