Jorge Campos, a high school senior from Palmdale, California, has experienced quite a bit in his short 17 years of life.
Yet, despite obstacles that w…
Read more: u.s. News , Teens, Homelessness, Harvard University, College Fi… 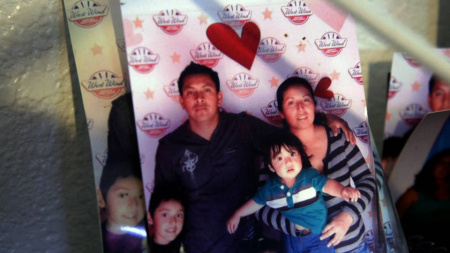 Maguiber was detained by ICE on February 9, 2017. His wife, Yiby, is unemployed and now watches their three children, who are U.S. citizens, by herself.; Credit: Erasmo Martinez/KQED

Many of the 65,000 immigrants detained on average in California every year are parents of U.S. citizens, according to a new report from an international human rights advocacy organization.

California courts and lockups are an integral part of immigration detention and deportation in the United States. The Golden State has the largest immigration court workload in the country. And the only other state to hold more detainees on any given day is Texas, according to data from U.S. Immigration and Customs Enforcement.

The advocacy organization Human Rights Watch determined that more than 10,000 immigrant detainees held in California each year have children who are U.S. citizens. The report, published Monday, analyzed nine months of ICE data that include information on detainees’ families. It used a statistical model to estimate the number of detainees with U.S. citizen children in California over a 4½-year period — from Jan. 1, 2011, to June 30, 2015.

That’s the case for a Guatemalan man named Maguiber, whose family lives in Oakland. His attorneys requested that KQED not publish his last name until his immigration status is resolved.

This February, before dawn one morning in Oakland, ICE agents knocked on the door of Maguiber’s home, asking about a hit-and-run. He went outside to show the agents his car registration and has been detained ever since at the West County Detention Facility in Richmond. Maguiber has three children who are U.S. citizens: Kevin, 8, Gabriela, 4, and Christopher, 2.

Yibi Heras says her husband is not a criminal.

“Like all of us, he has made mistakes,” she said. “But he’s not dangerous.”

The couple’s son, Kevin, has cerebral palsy and needs extra care. Heras stays home to care for him, and her two younger children. Maguiber is applying for asylum with the help of Heras and a pro bono lawyer.

“The California legislature is currently considering several initiatives that could help to mitigate the harms of immigration detention and protect Californian families,” the Human Rights Watch report says. “The purpose of the analysis set forth in this paper is to provide more detailed information on immigration detention in the state, with the goal of helping prompt better, more rights-respecting reforms.”

An ICE spokeswoman wrote in a statement to KQED that the agency “may consider” whether an individual is the parent of a U.S. citizen or caretaker of a minor.

“For parents who are ordered removed, it is their decision whether or not to relocate their children with them. If parents choose to have their U.S. citizen child(ren) accompany them, ICE accommodates, to the extent practicable, the parents’ efforts to make provisions for their child(ren). As practicable, ICE will coordinate to afford detained parents or legal guardians access to counsel, consulates and consular officials, courts, and/or family members in the weeks preceding removal in order to execute documents (e.g., powers of attorney, passport applications), purchase airline tickets, and make other necessary arrangements prior to travel,” she wrote.

Four bills moving through the state Legislature could dramatically change how immigration detention works in California.

The California State Sheriffs’ Association opposes three of the bills.

Spokesman Cory Salzillo said the state is overstepping its authority by attempting to regulate immigrant detention in the state. He said ICE sets the standards for immigrant detainees with local jails, and those standards are written into legally binding contracts.

Contra Costa Sheriff David Livingston is particularly concerned about SB 54. The county receives about $6 million a year from its contract with ICE to hold immigrant detainees like Maguiber.

“We think it’s a disaster,” he told KQED Newsroom prior to the release of the Human Rights Watch report.

California’s Trust Act restricts sheriffs from detaining immigrants with minor crimes past their release date. SB 54 would go much further than that, Livingston said.

“It would hamper our efforts in a very demonstrable way” he said. “We couldn’t share basic information about human trafficking or other cases with ICE, unless the individual has a prior conviction for a serious or violent felony. Putting those kinds of restrictions on our access to our federal colleagues and partners can be very damaging to public safety.”

Who is detained in California?

People are generally held in immigration detention while they await a hearing in immigration court. This population includes asylum seekers and people in deportation proceedings.

People detained in California come from all over the world, according to data from ICE.

The map below shows the number of immigration detainees held on one day in California in November 2016, by country of origin.

Human Rights Watch reports that nearly half of immigrant detainees held in California had no criminal histories. And of detainees with criminal records, those convicted of relatively minor offenses — immigration offenses, drug use, possession or DUI — outnumbered by nearly 3-to-1 those convicted of violent felonies. Many of those crimes were also committed years ago. On average, the most recent conviction had occurred seven years before being detained by immigration. Statistically, immigrants are less likely to commit crime than people born in the U.S.

The vast majority of immigrants detained in California were arrested in the state or at the border, Human Rights Watch said. About 40 percent of detainees entered into the system in San Diego or at the border; and 20 percent in Los Angeles.

Opponents of SB 54 and SB 29 say that ending immigration detention in California would separate families since detainees would end up in other states.

The majority, 55 percent, of people studied by Human Rights Watch were deported. The analysis shows that parents of U.S. citizens were more likely to be deported.

A brand new issue of the research journal Psychological Services has come out with an exclusive focus on homelessness, including veteran homelessness….
Read more: u.s. News , Psychology, Depression, Military, Homelessness, US … A group tasked with guiding Los Angeles out of the county’s homeless crisis came close to consensus on key strategies Thursday.

At issue is Measure H, a quarter-cent sales tax hike passed in March, which kicks off in July and is expected to generate $355 million annually for a decade to go towards combating homelessness.

With those funds, officials have promised to house 45,000 individuals and families in the next five years and prevent another 30,000 from becoming homeless.

But how to accomplish those goals? That’s the question before a 50-member panel of county agency leaders, homeless services providers, faith leaders, and formerly homeless individuals. The group’s been meeting for the last couple months and on Thursday, about 80 to 90 percent of them agreed on the biggest proposed investments for the first three years:

The county’s resolve on tackling homelessness, and the city of L.A.’s newly passed $1.2 billion bond towards constructing housing for homeless, comes at a time when the federal government, traditionally the funder of social services and housing assistance, is looking to scale back its role. President Donald Trump has asked the Departments of Housing and Urban Development and Health and Human Services to drastically cut their budgets.

While the group needs to be cognizant of that context, said Phil Ansell, director of the county’s homeless initiative, the group also can’t be paralyzed by funding cuts that may or may not happen.

“We need to be bold in taking advantage of this opportunity in making the most of the Measure H revenue to combat homelessness across the county,” he said.

The group has one remaining scheduled meeting, next week, before submitting its final recommendations—along with outlines of any disagreements among the group— to the L.A. County Board of Supervisors. The board is expected to vote on the recommendations in June.

Should the current recommendations hold, the group has calculated the investment will place over 34,000 people in permanent housing in the first three years, with thousands more receiving other types of help.

The biggest: what to cut to raise more money for supportive services, which the group agrees needs more than its requested amount of funding.

There’s also the question of whether to devote a requested $45 million over three years to developing and preserving affordable housing within L.A. County. The debate is whether L.A. County’s Board of Supervisors, which created the affordable housing fund in 2015, should use its own money or some other source to replenish the fund.

The county promised, when Measure H passed, to use the money as a way to enhance services for homeless, not “supplant” anything the county was already doing.

“What’s being proposed now is that we’re going to take this preexisting commitment, before anyone had heard of the letter ‘H’ ,” said Greg Spiegel of the Inner City Law Center. “And saying, ‘oh! that’s come along, we’re going to use it to fill this prior obligation,’ instead of using it to expand.”

Similar concerns have been raised about the commitment of the City of L.A., which did not renew funds for homelessness added last year in Mayor Eric Garcetti’s budget proposal for the coming year.

Both the county’s Chief Executive Office and the mayor’s office say those monies were added in prior years as start-up costs with the idea that down the road, something like Measure H would be needed to sustain them.

“The Board of Supervisors was courageous because they took one-time money and said, go ahead and do what’s needed in the system and start things that would be difficult to terminate,” Ansell said in the county’s defense.

Another unsettled item is a $1 million annual request from the L.A. County Sheriff’s Department to fund six deputy sheriffs, a sergeant, and a lieutenant specifically devoted to homeless outreach efforts. The department has also requested that a similar amount be set aside for adding officers to do outreach in areas not covered by the sheriff’s department.

Some in the room, however, were reluctant to use any Measure H funds towards public safety agencies, which already receive about 30 percent of the county’s $30 billion budget.

“Can that not be a contribution from the sheriff’s department to this effort, considering the size of our public safety budgets,” said Chris Ko of the United Way.

‘There are areas that we know that are concentrated with homeless individuals not in a law enforcement capacity really should not be contacting,” he said. “In fact they’re hiding even from subject matter experts.”

Also on the table is a program at the Department of Children and Family Services that would expand a pilot that provides an apartment and temporary rent help to parents whose children are in foster care because their parents are homeless. DCFS has requested $12 million to serve up to 800 families a year for three years. The agency said it would then use the cost savings from getting kids out of the foster care system to fund the program going forward.

Another item still to be settled is whether to put $10 million into a “housing innovation” fund that would provide seed money to experimental ideas for housing homeless. (Think “tiny house” fad.)

The final group meeting is scheduled for May 10 at 1:30pm at the Cathedral of Our Lady of the Angels in Downtown Los Angeles.